With everything else happening in the world around us, it may be easy to forget that this day also marks the return of spring. To mark the occasion, we’re sharing a work of special significance from our Permanent Collection: Carol Wainio’s visually sumptuous painting, Season’s End.

Wainio is an accomplished senior Canadian painter and recipient of the Governor General’s Award for Visual Arts who had her creative beginnings in Kitchener-Waterloo. From a young age, she looked to the rural fringes of this city during a time of transition to find inspiration for her work, in which lushly layered landscapes become unstable terrain for the interplay of human and animal lives. 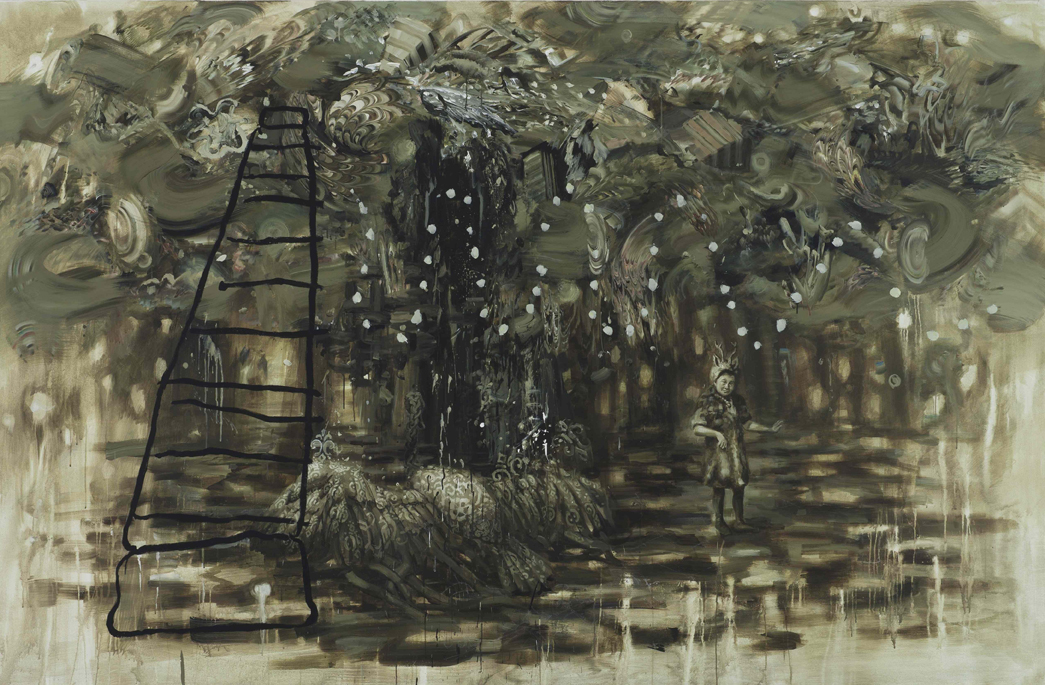 Season’s End is reflective of Wainio’s practice of alluding to fables as metaphors for the tenuous play of class and power in society; her human figure wears fur and antlers, while a large burrowing bird is camouflaged in patterns that recall monogrammed luxury goods chosen to signal social affluence. Brought together in a disintegrating landscape dominated by a child-like drawing of a teetering oil extraction tower, all exist beneath a menacingly marbled sky that threatens to fall through its sheer visual weight while remaining magically suspended in space, open to the possibility of action and change.

Season’s End was acquired for the Permanent Collection in honour and memory of Caroline Oliver (1953-2015), a dedicated champion of the arts and KWAG’s former Director of Marketing and Development. Caroline grew fond of this work while it was on view in Old Masters, Carol Wainio’s 2013 solo exhibition at KWAG, and she would be delighted to know that has remained in our care for future generations to see – both in our Gallery and online today wherever this may find you.

CAROL WAINIO (Canadian, 1955)
Season’s End, 2012
Acrylic on canvas
In memory of Kitchener-Waterloo Art Gallery employee Caroline Oliver, a keen supporter of the arts.
Purchased with funds donated by the family and the support of the Canada Council for the Arts’ Acquisition Assistance Program, 2016.
© Carol Wainio.
Photo: Robert McNair