While few among us can imagine any hint of international travel in this unusual summer, one work of art in our Permanent Collection has gone abroad for a special journey to the 11th Berlin Biennale. Shuvinai Ashoona’s Composition (Clock) (2014) left the Gallery last month to begin its journey overseas to Berlin, Germany where Ashoona’s large-scale drawing will be on loan for this major interntational exhibition from 5 September to 1 November 2020.

Shuvinai Ashoona is a third generation artist of the famed Kinngait Studios (formerly known as the West Baffin Eskimo Co-operative) in Cape Dorset, Nunavut. Her grandmother was Pitseolak Ashoona, the respected graphic artist, and her cousin was the late Sobey Award-winning Annie Pootoogook. Ashoona’s work is unique within the history of the Kinngait Studios in that her primary mode of artistic production has always been drawing, rather than printmaking. 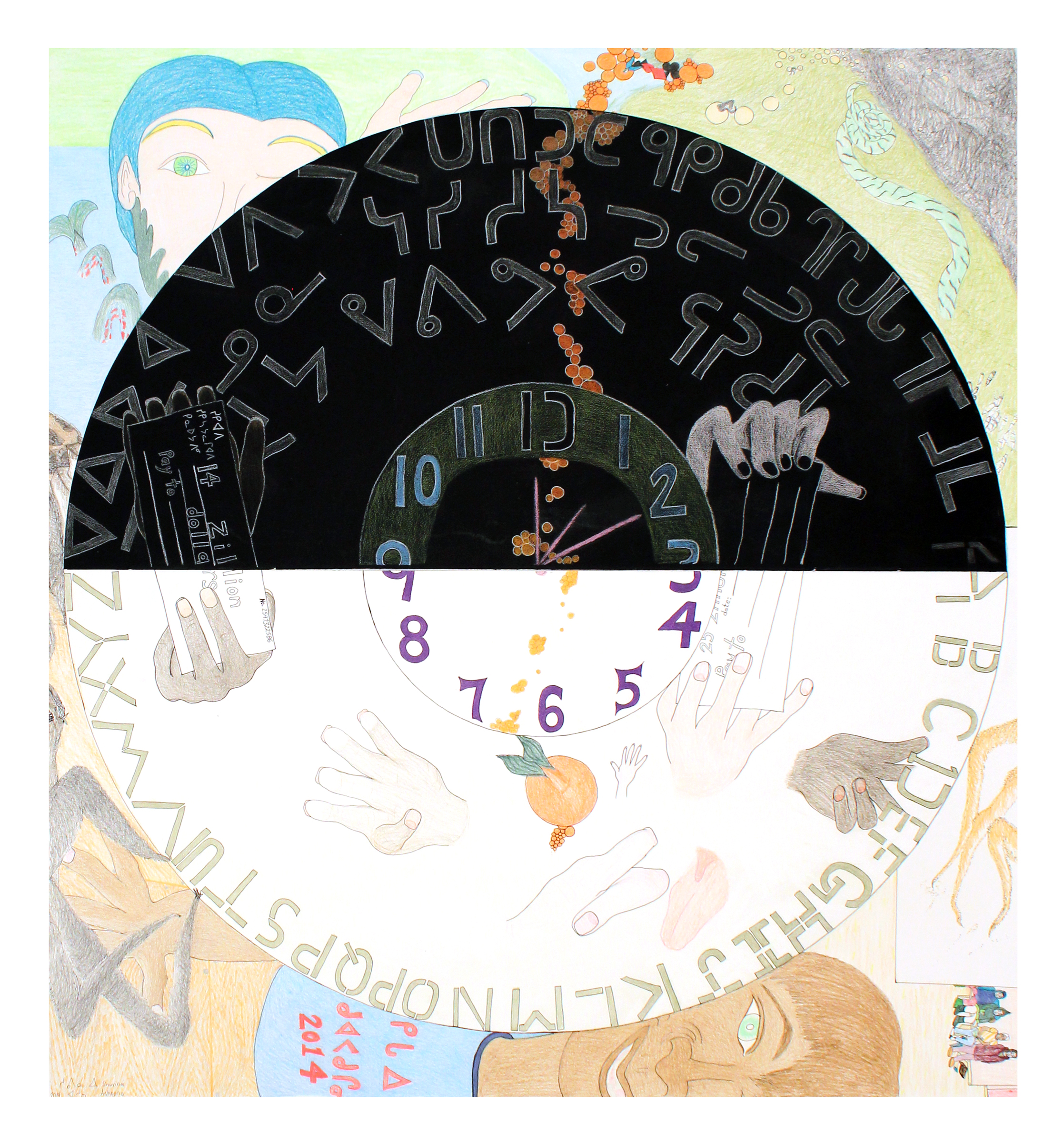 Composition (Clock) represents a significant turn in Ashoona’s work when her close observation of the contemporary world as lived in Cape Dorset expands to include mythological references and symbolic representations of complex world systems. From 2011 onwards, Ashoona has incorporated planetary motifs and other references to circular forms in compositions that depict humans and animals in stages of transformation, engaging images of Sedna (the goddess of the sea) and other aspects of Inuit creation myths. Composition (Clock) includes both Inuktitut syllabics and Western Arabic letters and numerals as the core of a globe-like form. The juxtaposition is a reference to the exchange that exists between the North and the South, and evokes a sense of the various connections that keep culture in perpetual motion.

Ashoona has collaborated with artists from the North and the South, most notably with another artist whose work also recently entered KWAG’s Permanent Collection: Shary Boyle. Her career has only continued to grow in prominence since we acquired Composition (Clock) in 2018. A major retrospective of her large-scale drawings, Mapping Worlds, opened at The Power Plant in early 2019 as she was awarded the Gershon Iskowitz Prize, a $50,000 prize recognizing outstanding contributions to the visual arts in Canada that is accompanied by a forthcoming solo exhibition at the Art Gallery of Ontario.

Ashoona’s solo and collaborative work have been featured in exhibitions at numerous institutions, among them Mass MoCA, Massachusetts (2012); SITE Santa Fe (2014), and the Esker Foundation, Calgary (2017). Her work can be found in the collections of major museums in Canada such as the Art Gallery of Ontario, the Canadian Museum of Civilization, the Winnipeg Art Gallery, and the National Gallery of Canada.