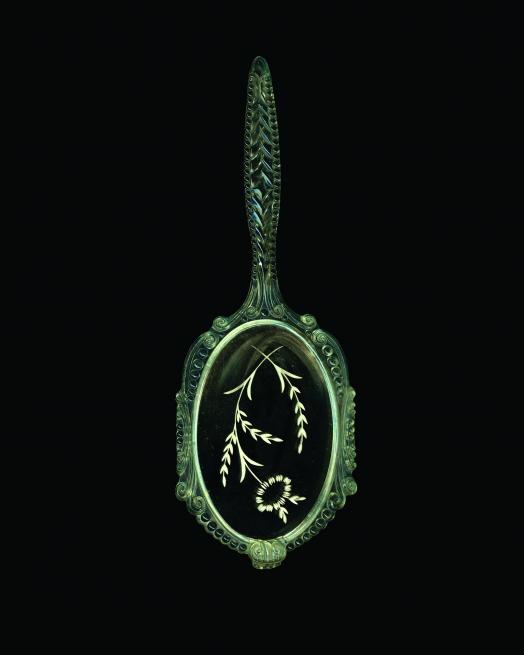 Over the course of over 35 years, April Hickox has mined the distinctions between personal and public sites through film, video, photography and installation. Her work is rooted in the narrative histories that individuals accumulate throughout their lives and the ability of inanimate objects to shape memory.

Index will feature a selection of works by April Hickox donated to the Permanent Collection in 2012. Representing three distinct photographic series – Vantage Point, Glance, and Echo – these works convey Hickox’s interest in the aperture as both a mechanical and symbolic device.

Making its KWAG premiere, the Echo series serves as a poignant counterpoint to present-day selfie culture.  Here, Hickox creates a taxonomy of hand-mirrors, a traditionally-female heirloom which is representative of what is often thought to be a simpler time in history – a point in which self-reflection and personal actions existed largely between individuals, rather that the post-privacy milieu in which we currently live. The mirror, for Hickox, reflects an image of how we want ourselves to be seen; it does not reflect the truth of our emotional lives, or who we think we are. Hickox’s mirrors lack a reflective surface, the result of a digital scanning process that renders each mirror as a sea of black, with a scarred and aged surface, and ultimately incapable of reciprocating our interest.

April Hickox is a lens-based artist, teacher and independent curator who lives on the Toronto Islands. Her work was been exhibited internationally and can be found in numerous Canadian collections. Hickox is currently associate professor of photography at the Ontario College of Art and Design University in Toronto.