Emanuel Licha // Now Have A Look At This Machine 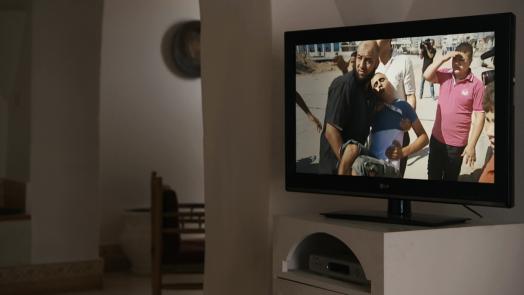 Curated by Lesley Johnstone, Head of Exhibitions and Education at the Musée d’art contemporain de Montréal

Now just have a look at this machine.

Up till now a few things still had to be set by hand,

but from this moment it works all by itself.

It’s a remarkable piece of apparatus...

Franz Kafka, In the Penal Colony

The exhibition Now Have A Look At This Machine is a reflection on what Québec artist Emanuel Licha terms the “hotel machine,” examining the role hotels play in the fabrication, analysis and dissemination of images of war. It includes an hour-long creative documentary titled Hotel Machine, which was filmed in the hotels that housed foreign war correspondents covering conflicts in Beirut, Sarajevo, Gaza, Kyiv and Belgrade. Surrounding the central projection space of the film are five archival stations which, through texts, images, documents and excerpts from news reports and fiction films, investigate the concept of the war hotel as proximity, vantage point, security, communication and hub.

The choice of a hotel where journalists will live and work during a conflict is made according to its capacity to provide security, personnel, communications, food and electricity, as well as its situation with regard to the theatre of operations. Although they are in the midst of conflicts, war hotels remain slightly detached; entering a war hotel is like entering a world of its own. The presence of journalists inevitably draws other protagonists: fixers, translators, politicians, negotiators, experts and military officials, along with civilians. The discussions and negotiations that take place on the hotel premises, combined with the fact that it is from the hotel that images and discourses about the war are put into circulation, contribute to transforming it into a pivotal place in the unfolding of events. Consisting of a montage of the architectural spaces of the five hotels and their staff, many of whom recount experiences and memories of the time when the hotel was a hub of activity, Emanuel Licha’s research-based project is a fictive, but all too accurate, portrait of what is rarely seen yet integral to our knowledge of conflicts.

Artist and filmmaker Emanuel Licha was born in Montréal in 1971. He studied urban geography and then the visual arts. His work in film, video installation and photography focuses on the role of architecture in the representation of conflicts, leading to a reading of the features of the urban landscape as social, historical and political signs. His recent projects investigate the means by which traumatic and violent    events are being witnessed and observed. Licha’s exhibition Now Have A Look At This Machine was held, before its presentation at the Kitchener-Waterloo Art Gallery, at two other venues: The Rooms Provincial Art Gallery in St. John’s and the Musée d’art contemporain de Montréal. Some of his other solo exhibitions have been held in Québec at the Musée régional de Rimouski, as well as SBC Gallery and Galerie B-312 in Montréal; in Europe at LOOP 09, Barcelona; Galerie Cortex Athletico, Bordeaux; Canadian Cultural Centre, Paris; Careof, Milan; EXIT – Institute for Contemporary Art, Peja; and at Ex Teresa Arte Actual, Mexico City.

The exhibition Emanuel Licha: Now Have a Look at This Machine is organized and circulated by the Musée d’art contemporain de Montréal with the financial support of the Government of Canada.