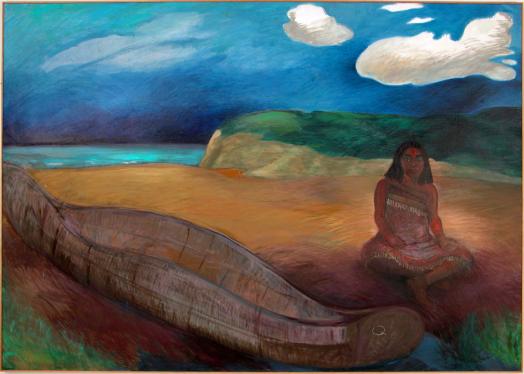 In horror and thriller cinematic culture there is a trope known as “final girl.” This term describes the common use of a female character who endures havoc to end up the lone survivor at the end of a film. This selection of works explores endurance as a strength that surfaces in images of or by women that can be found in the Gallery’s Permanent Collection.

Central to this exhibition is a pair of works by two of the most influential contemporary Canadian artists within the KWAG collection: Joyce Wieland and Shary Boyle. Painted by Wieland in 1988, Shawnadithit is a monumental painting of the young Beothuk woman who suffered settler violence and the dispossession of her traditional lands. A fiercely intelligent witness to genocide, Shawnadithit’s writings and drawings provide critical insight into the livelihood that had sustained her people.

Making its KWAG premiere since its acquisition in 2017, Shary Boyle’s Looney Tunes is a type of woodland chimera; a seated figure combining the youthful body of a woman and the cartoonish face of a witch. This figure conflates the opposing roles occupied by women in most conventional fairy tales– the virtuous maiden and the wrathful crone. Looney Tunes might be seen as a parable of the solitary woman, a trope within fairy tales that often signals a risk or a threat. Boyle, however, asserts that while her subject may be marginalized, rendered invisible or incomplete in the minds of others, her existence is an unmistakeable act of vigilance.