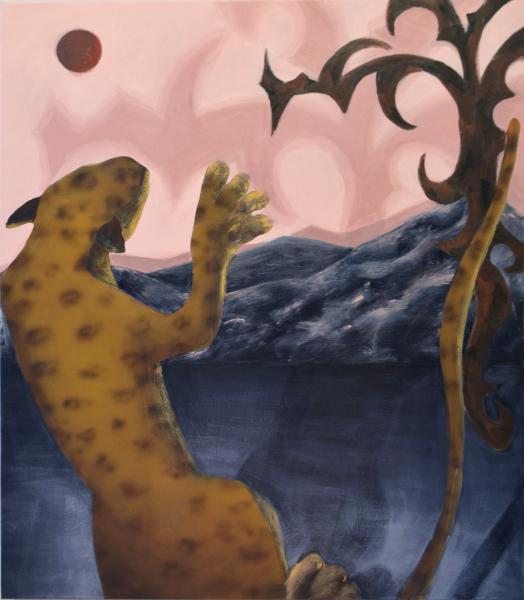 For Waterloo-born, Brooklyn based artist geetha thurairajah, form is a slippery precursor to meaning.  Her paintings begin as digital renderings, often composed of a surreal mix of symbols and visual quotations. Figures appear as fragments and shadows that refuse to stay confined to traditional compositional boundaries. thurairajah conjures the image of the trickster, a shapeshifting rebel who can be found in fables and origin narratives from cultures all over the world.  By entangling concepts of the familiar and the foreign, thurairajah encourages us to see the symbolic potential inherent in images: regardless of where they are sourced and by whom they are seen.

This spring we welcome geetha thurairajah to KWAG as our Artist in Residence. During her stay in March 2019, thurairajah will develop a new site-responsive installation in our Eastman Gallery and participate in various programming initiatives designed to engage local youth in digital and painterly forms of experimental representation.

Currently based in Brooklyn, New York, geetha thurairajah earned a BA from Wilfrid Laurier University (2010) and a BFA from the Nova Scotia College of Art and Design (2014). She was a finalist in the RBC Canadian Painting Competition in 2016 and 2018 and received an Honourable Mention in 2018. Her work has been exhibited internationally, and has been included in recent group exhibitions at The Power Plant (Toronto) and Oakville Galleries.

Event Type:
Join us for a free Artist Talk to celebrate the opening of 'Migration is more momentous than ancient invasions'