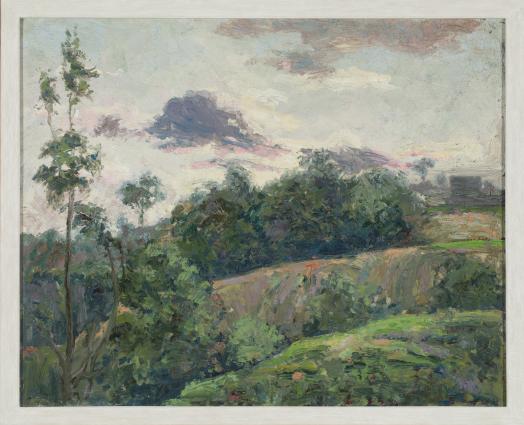 Not from successful love alone,
Nor wealth, nor honor'd middle age, nor victories of politics or
war;
But as life wanes, and all the turbulent passions calm,
As gorgeous, vapory, silent hues cover the evening sky,
As softness, fulness, rest, suffuse the frame, like freshier, balmier
air,
As the days take on a mellower light, and the apple at last hangs
really finish'd and indolent-ripe on the tree,
Then for the teeming quietest, happiest days of all!
The brooding and blissful halcyon days! [1]

The power of mythology might be found in its stubbornness. While the customs and beliefs that many myths seek to explain may have changed or disappeared over time, their narratives live on in the minds of artists and turns of phrase that surface in common speech.

This exhibition draws its inspiration from one such idiom. In the Greek myth of Alcyone and Ceyx, an ill-fated couple is transformed into kingfisher birds and granted a short seasonal reprieve to nest on the Aegean Sea. Every winter, these “Halcyon Days” would provide the birds with calm and asylum from the harsh adversity of the crashing waves. Today, the phrase is used to describe a period of peacefulness in the past.

Envisioned as a complement to the other concurrent exhibitions on view, Halcyon Days is a selection of works from the Permanent Collection that allude to nostalgic utopias and serve as visual equivalents of safe space. Central to the exhibition is a series of prints by Brian Fisher entitled Odyssey. Completed in 1969 – the year of the moon landing – Odyssey functions like a series of windows, each looking out onto a different geometric mirage floating in a sea of colour. In Lynne Cohen’s Spa, we are reminded of the age-old belief in the restorative power of water and the strangeness of the spaces where many now seek such services.

With other works, the theme of serenity is apparent through juxtaposition. Making its public debut since its recent conservation, a small painting by Tom Thomson will be shown alongside a photograph by Jon Sasaki detailing the painting’s condition prior to treatment. With one work representing a peaceful vista with rolling hills and the other a fugitive surface of flaking paint, the pair invites us to consider the different realities that coexist within a shared landscape.