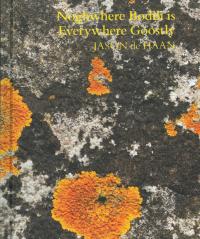 Jason de Haan has made a name for himself with sculptures, collages, installations and public projects that engage time, especially the long-scale perception of time. Like Duchamp, his goal is to make an art that signifies more than just its three dimensions. Two of de Haan’s larger works New Jerusalem (2010) and New Jerusalem, Cloud Shrouded (2012) embody the artist’s approach as they push the viewer to envisage time on a broader, geological scale. Titled after the post-apocalyptic ‘City of God’, New Jerusalem is a dizzying cityscape of glass domes and crystal towers populated with monuments of omniscient eyeballs and spacecraft. Its counterpart, New Jerusalem, Cloud Shrouded, is a veritable colour wheel of cloudscapes, void of any signs of life. Together the effect is one of ambiguity; which is our future and which is our past? This work, like many others, revolves on a kind of magical thinking in which de Haan uses language to reinvent the purpose of the objects in order to reveal something more. The publication’s title is the Middle English version of the phrase “Nowhere Bodily is Everywhere Ghostly” and is drawn from The Cloude of Unknowyng, an anonymous 14th century text of theological mysticism whose main proposition is to surrender one’s mind to a realm of "unknowingness”. The text invites the reader to consider positions above and below "the cloud", an apt description of Jason de Haan’s work. This publication is the most comprehensive monograph on the work of Jason de Haan to date.

Jason de Haan: Noghwhere Bodili is Everywhere Goostly is distributed by ABC Art Books Canada and can be purchased from ABC, book retailers, and co-publishing galleries.