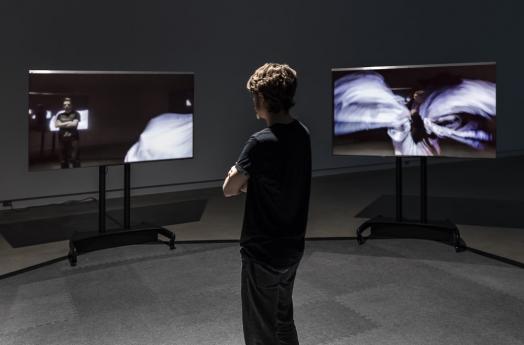 ­In an otherwise empty gallery space, six reflective panels are positioned in a ring, facing inward, catching one another in their reflection, creating channels of infinite regress. A dancing figure in the form of a spiraling flurry of silk appears within a reflective frame, disrupting the mirrored image, and moves from one panel to another, seemingly crossing the space that spans between each. As the figure traverses the circumference of the ring it appears infinitely in the cross reflection, where viewers and the dancer appear to share the same physical space.

Bearing the influence of Art Nouveau scenography and spectral forms of technology, Guelph-based Jenn E Norton’s Slipstream is an immersive installation wherein the reflected image of a dancer moves across the gallery space, implicating the viewer in their choreographed dance. The movement is reminiscent of Loïe Fuller’s (1862 – 1928) often imitated serpentine dance. Credited as an innovator of modern dance, Fuller used her voluminous robes as a performative sculptural object, radically positioning dance within a conceptual realm. Channeling theatrical strategies from a century ago, Norton employs choreographed movements and digital technologies to position the body as a site of metamorphic potential.

Event Type:
Join us for a free Artist Talk ahead of the Opening Reception of Jenn E Norton's Slipstream