Joseph Tisiga // IBC: They say he hit them with his gloves 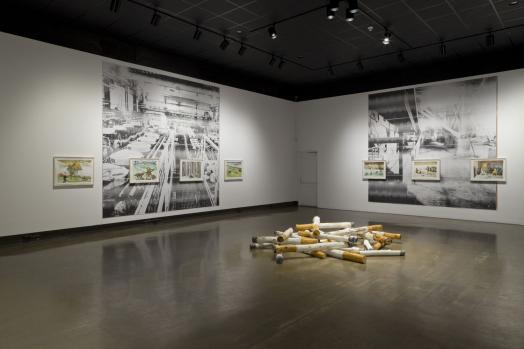 Yukon-based Joseph Tisiga is known for his watercolours and sculptures that reflect on history, hybrid identities and an evolving personal mythology. His work combines imagery inspired by social and philosophical influences that have shaped his perspective. Ultimately, Tisiga’s work reflects a love of new approaches to storytelling; the more unconventional, the better.

For his project at KWAG, Tisiga will explore his fictional Indian Brand Corporation (IBC) narrative to both surreal and subversive ends. The Kaska folk legend of the Bladder-Head Boy will provide a starting point for a series of new watercolour and installation works. Combining references to long-extinct species and magical garments, the Bladder-Head Boy legend references transformation and disguise, two concepts that can be found throughout Tisiga’s work.

Joseph Tisiga was born in 1984 in Edmonton and is a member of the Kaska Dena Nation. He is currently based in Whitehorse. His work can be found in institutional collections such as the National Gallery of Canada, the Montreal Museum of Fine Arts, the RBC Collection, as well as numerous private collections in Toronto, Montreal and Vancouver. Tisiga was a finalist in the 2009 RBC Painting Competition and was long-listed for the Sobey Art Award in 2011. He was recently named a REVEAL Indigenous Art Award winner.

Opening Reception: Joseph Tisiga; IBC: They say he hit them with his gloves