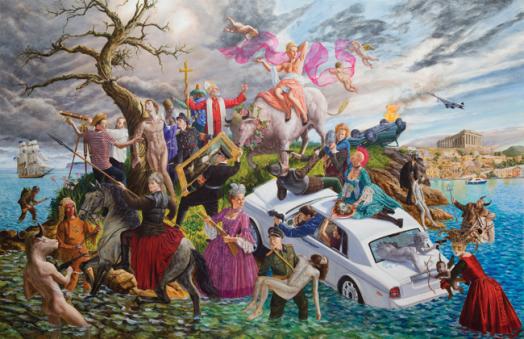 Kent Monkman is a Canadian artist of Cree ancestry whose work has been lauded for its humorous and sexually-charged critique of Canada's colonial past. Working across a variety of mediums--including painting, installation, film and performance--Monkman reimagines how betrayal and self-preservation are entangled within our national history. Often with the aid of his alter ego, Miss Chief Eagle Testickle, Monkman creates scenes in which seduction and sexual conquest serve as analogies for the historical representation of First Nations peoples and land by European and settler artists.

The Four Continents is comprised of a series of paintings made between 2012 and 2016, shown together for the first time. In this series, Monkman takes as his point of departure Giovanni Battista Tiepolo's epic frescoes commissioned for a private residence in Würzburg, Germany. Begun in 1751 just prior to the massive revolutions in America and France, the centrepiece of the series represented a day in the life of the Greek god, Apollo, with the four continents allegorized in peripheral scenes. In Monkman's reinterpretation of the Rococo masterwork, each continent is personified by a Two-Spirit sovereign with Miss Chief playing the roles of Africa, America, Asia, and Europe. Tiepolo's allegory is updated to include architectural wonders and notable figures from history amidst chaotic crowds. The colours found on each of the four cardinal points of the Medicine Wheel figure prominently in the installation, honing our focus on notions of alignment and interrelatedness. The subtle inclusion of emblems of modernity such as abstract art, commercial luxury goods, and mechanized warfare allude to the multiple ways in which trade and theft are manifest in global narratives. Through a dizzying series of juxtapositions, Monkman invites us to consider how frisson and fiction can be found when cultural histories and artistic canons collide.

Kent Monkman has had solo exhibitions at numerous Canadian museums including the Montreal Museum of Fine Art, the Museum of Contemporary Canadian Art in Toronto, the Winnipeg Art Gallery, and the Art Gallery of Hamilton. He has participated in various international group exhibitions including: The American West, at Compton Verney, in Warwickshire, England, Remember Humanity at Witte de With, Rotterdam, the 2010 Sydney Biennale, and Oh Canada!, MASS MOCA. His work is represented in numerous public and private collections including the National Gallery of Canada, the Denver Art Museum, Montreal Museum of Fine Arts, the Glenbow Museum, the Art Gallery of Ontario, the Smithsonian's National Museum of the American Indian, the Vancouver Art Gallery, and the Kitchener-Waterloo Art Gallery. He is represented by Pierre-François Ouellette art contemporain in Montreal and Toronto, Trepanier Baer Gallery in Calgary and Peters Projects in Santa Fe.

Sponsor: The Kitchener and Waterloo Community Foundation - The Musagetes Fund