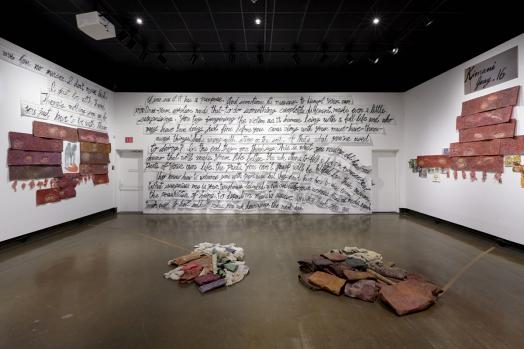 Palimpsest… a word to describe the effect of inscription and partial erasure. An accumulation of marks and impressions of all sorts. A resonant hum. A perennial garden. A newspaper. A commute in the dark.

For Vancouver-based Lucie Chan, the palimpsest is a framework for acknowledging the histories of individuals that migrate or remain otherwise unfixed. In making her work, research is synonymous with listening: Chan gathers accounts of living from numerous sources such as one-on-one interviews with strangers, conversations with taxi drivers, or simply noting the repetition of trauma by listening to the news. From this informal process of collecting evidence of lives-lived, Chan creates immersive installations wherein drawings and textual fragments serve as a registry of both experience and pervasive forms of inequity.

How to be 57 draws its title from this act of learning through the lives of others, in particular two 57-year old women who have radically different experiences with police in their respective homes. One, a Dutch immigrant in France finds herself interrogated in her home despite her innocence. The other, an unarmed civil servant, suffers racialized violence when her apartment is mistakenly raided. A nod to both age and anonymity, How to be 57 might be understood as a hypothetical guide to experiencing a precise moment of transformation in a stranger’s life, a reminder that living is an act of perpetual reinscription.

Lucie Chan (b. Guyana) teaches at Emily Carr University of Art and Design. She holds a BFA with distinction from the Alberta College of Art and Design and a MFA from the Nova Scotia College of Art and Design University with a specialization in drawing. She has shown nationally in various group and solo exhibitions and has undertaken artist residencies at ARTerra in Lobão da Beira, Portugal; the Ross Creek Centre for the Arts in Canning, Nova Scotia; Banff Centre for the Arts in Banff, Alberta; Museum London in London, Ontario; the Art Gallery of Nova Scotia and Mount Saint Vincent University Art Gallery in Halifax, Nova Scotia; and the Foreman Art Gallery in Sherbrooke, Quebec. In addition to receiving numerous provincial and national grants, she has been long-listed twice for the Sobey Art Award (2005, 2010).

Event Type:
Join us to celebrate the opening of Lucie Chan's new exhibition, How To Be 57. Free admission.