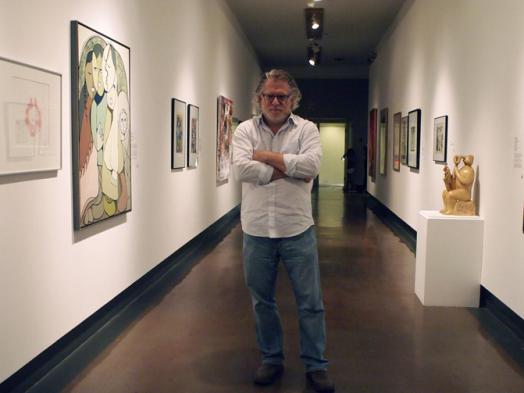 How long have you been a member of KWAG?

What is the first piece of art you remember seeing as a child or young person?

The first piece of art I recall seeing as a child was The Pioneer at Fort Garry, 1861 by Adam Sheriff Scott. This massive
(16m x 3m) mural hung above the bank of elevators on the first floor of the Hudson's Bay Company store in Winnipeg. As a child living there in the early 70's, I was inundated with history as the Province of Manitoba and the city itself celebrated their centennials in quick succession. The Manitoba Museum of Man and Nature opened its' Main Street and Nonesuch exhibits around the same time, but it was the mural that transported me, as it depicted the intertwining livelihoods of three cultures (Aboriginal, Métis and French/English Canadians) in front of Winnipeg's HBC outpost near the confluence of the Red and the Assiniboine Rivers. This was history, but it was history that I knew had happened just down the road. It was relevant.

What projects are you currently working on?

I am working on a project called Complicity, which interestingly enough draws heavily from the themes in The Pioneer at Fort Garry, 1861. Complicity takes an interpretive look at immigrants past and present, and the Aboriginal peoples with whom they engaged. As the non-native father of two disenfranchised Mohawk children, I have the perspective of a reluctant colonialist. I am keenly aware of my participation in the process of a slow, cultural upheaval  through familial relation. The Hudson's Bay blanket becomes a unifying theme in this exploration, literally the fabric of the country we are today.

What KWAG exhibit have you enjoyed the most?

I was recently floored by Lynne Cohen's False Clues/Faux Indices, a collection of the photographer's work that was exhibited shortly after her death last year. Walking into the Gallery I couldn't help but feel overwhelmed by the size and spectacle of her work.

If  you weren't a photographer, what would you be doing?

If I wasn't a photographer I would be a photo editor. Photography has become one of the most important things in my life. Contemplation of a GOOD photograph is transcendent. To that end I have formed a collective of some 40+ photographers called Foto:RE, and was lucky to be involved with founding Flash|Contemporary Photography HERE, a one day photographic event that will be held for a second time this coming January in Kitchener.