The Myth of Consensus 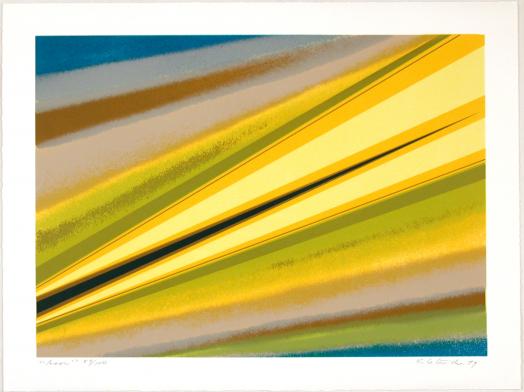 On February 15, 1965 Canada debuted its new national flag – an act bound up with aspiration and declarations of so-called sovereignty. Ubiquitous and deceptively simple, the national flag is something to which we now give little thought. By looking closer at its form, we might be surprised to find similarities with a basic understanding of what a painting can be: a piece of fabric with brightly coloured lines or simplified shapes that hold symbolic meaning for a group of people.

The decade following Canada’s adoption of the maple leaf flag as a symbol of national unity would reveal a country fraying at its seams. The bloom of counter-cultures and constitutional separatism mobilized a rebellious new generation of citizens. Against this cultural backdrop, artists sought out innovative ways to give voice to an era of rapid societal change, turning away from traditional modes of representation and towards abstraction.

The Myth of Consensus convenes rarely-seen abstract works from the Permanent Collection dating from the 1960s and 1970s. Bombastic, moody, and rich in hue, these works provide a snapshot of a different nation taking shape in the studios of artists across the country.

Over the course of February 2020, Aislinn Thomas worked closely with a stream of volunteers to create non-traditional visual descriptions of selected artworks in this exhibition. Thomas asked each participant to assume a “first-person” voice, thus imagining each painting as a living entity with its own thoughts and experiences. By weaving together intergenerational and often tender perspectives, Thomas reminds us of the inevitable shifts in our sense of self over time.

A written transcript of A piece of cloth, held taut is also available in PDF format. Click here to read it now.

ASL interpretations of A piece of cloth held taut provided by literary media artist Jolanta Lapiak, with support from the Region of Waterloo Arts Fund and the Kitchener Waterloo Community Foundation.