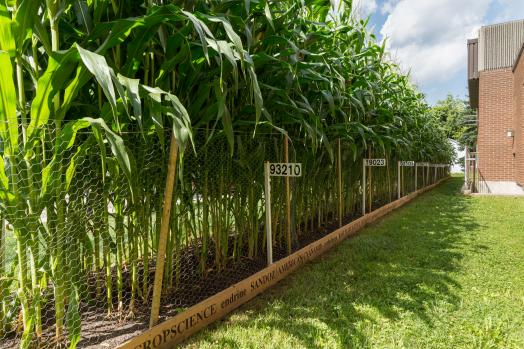 Equal parts activist and artist, Ron Benner combines photography and installation, often in the form of site-specific installation. Through these means, Benner reflects on the histories of oppression that intersect with the corporatization of our food sources. Central to Benner’s work is the concept of the vector. In mathematics, a vector is understood to be a precise point along a direct path. In biology, however, a vector is a living organism that carries and transmits disease.

In Trans/mission: 101, Benner invites us to see the potential for education in our immediate environs. The 101 of its title is both a reference to the Gallery’s address and a colloquial short-hand for an introductory lesson. Now in its second season on the Centre In The Square’s exterior grounds along Queen St. North, Trans/mission: 101 is composed of three garden beds in the shape of the aforementioned numerals. Photographic images that connect us to other geographies are interspersed with various ornamental plants, including different varieties of maize. Frequently found in Benner’s gardens, maize has been cultivated in the Americas by Indigenous farmers for thousands of years. It is a crop with limitless possibilities; it can be found as an ingredient in processed foods, used medicinally, and processed as a fuel. Its history as an entirely human-dependent crop, its export with the advent of colonialist encounter, and its radical alteration through genetic modification contribute to the symbolic value that maize brings to Benner’s work. One can’t help by ponder how little we know about food and water and the other things that sustain us. What have we risked in the name of industry?  What have we lost?

All gardens need attention. By thriving, a garden communicates our attentiveness and willingness to prioritize its wellbeing. Its neglect is just as telling. In Benner’s work we are reminded that localized knowledge is inextricably linked to global issues.

Ron Benner (London, Ontario) has maintained a multi-faceted career in the visual arts in 1970. He has participated in numerous residencies, symposia, and outreach initiatives which aim to extend the discourse on legacies of imperialism on our land usage. Benner has exhibited his work both nationally and internationally, most notably at the Art Gallery of Ontario, Art Gallery of Windsor, Museum London, and Oakville Galleries. In 2011 he was appointed Adjunct Research Professor in the Department of Visual Arts, Faculty of Arts and Humanities, The University of Western Ontario.