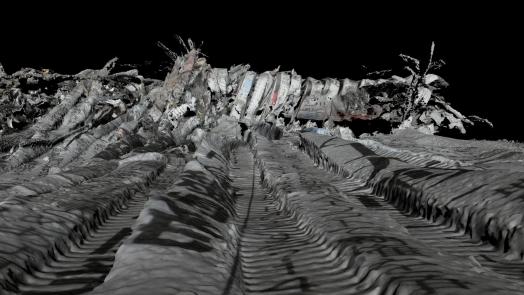 How do you know the truth? More specifically, how do you come to know the world and culture in which you currently live?

Beyond a direct experience of the people, places and things around us, we often turn to forms of mass media to help inform our place in the wider world. This includes the books that we read, the music we listen to and the television shows we watch. It also extends to all forms of the media landscape across radio, screens and print. We turn to these sources to learn about the events of the world, presented to us as truthful fact by reporters.

In Shapes of Facts, Nishimura turns his attention toward the newspaper. By 3-D scanning and virtually orbiting crumpled, aged masses of newspaper, the artist critically questions this particular form of print media as a vehicle for verifiable fact. The newspapers appear as vast landscapes: fragmented plots where little can be known with absolute certainty. A world of post-truth politics, fueled by the incessant drive of a 24-hour news cycle, the proliferation of social media and the rapid rise of alternative newsgroups, seems to be an alien world in comparison to an imagined past.

Behind the surface of every media is a thinly veiled ideology – a system of ideas and ideals that simultaneously aspires to describe the world and to change it. Nishimura laments the contemporary slipperiness of fact and encourages us to be aware of the forces that shape our subjective views of the world.