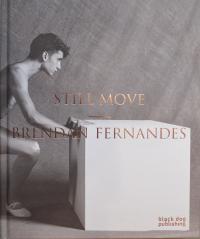 Still Move is the first monograph to focus on the performance work of artist Brendan Fernandes. For the last five years, Fernandes has explored how stillness and static movement can be powerful tools of resistance. Informed by his training in ballet and modern dance, Fernandes’ practice routinely explores the role of the body within social and political spaces, questioning and breaking down the notion of hegemony. For Fernandes, choreography serves as a remarkable tool for decoding and unpacking this complex conversation. Inspired by ballet movement vocabularies relating to labour and endurance, the work demonstrates the artist’s keen interest in responding to histories of avant-garde dance and its relationship to visual art. His work takes on numerous forms, building on an effort to negotiate a complex sense of both individual and cultural identities within performative acts.

Brendan Fernandes is a Canadian artist of Kenyan and Indian descent, currently based in Chicago. Fernandes has exhibited internationally, including exhibitions at the Solomon R. Guggenheim Museum, Museum of Modern Art, Musée d’art contemporain de Montréal, National Gallery of Canada, Brooklyn Museum, Mass MoCA, Andy Warhol Museum, Deutsche Guggenheim, Bergen Kunsthall, and Stedelijk Museum. Fernandes has been awarded many highly regarded residencies around the world, including The Canada Council for the Arts International Residency in Trinidad and Tobago (2006), the Gyeonggi Creation Centre at the Gyeonggi Museum of Art, Korea (2009) and ZKM, Karlsruhe, Germany (2011). He completed the Independent Study Program of the Whitney Museum of American Art (2007) and earned his MFA (2005) from The University of Western Ontario and his BFA (2002) from York University. He was a finalist for the Sobey Art Award in 2010, and was on the long-list for the award in 2013 and 2015. He was a 2014 recipient of a Robert Rauschenberg Residency and Fellowship. He is currently Visiting Artist in Art Theory and Practice at Northwestern University.