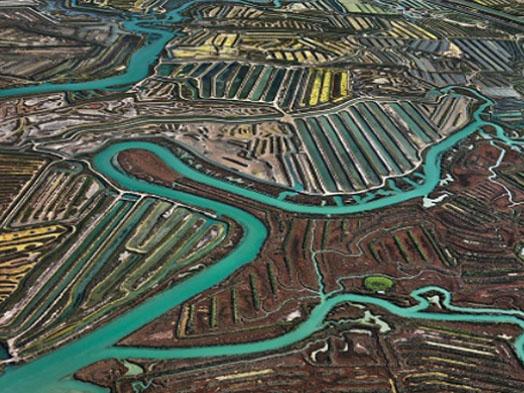 For over thirty years the work of Edward Burtynsky has focused on how industrialisation has rapidly changed the natural world. His subjects have included industrial architecture in the form of factories in both China and North America, the depletion of natural resources from mining and oil extraction, and the radical transformation of landscapes in pursuit of progress and efficiency. Though the particularities and locations of his subjects may differ from series to series, Burtynsky’s work has redefined the sublime as it pertains to contemporary photography.

Infinite Change focuses on the recent gift of 40 works to KWAG by the artist—a supplement to the 53 works that were brought into the collection in 2000. Many of the works included in this exhibition reflect Burtynsky’s increasing use of an aerial vantage point—a viewpoint generally associated with scientific, rather than artistic, inquiry. In his Oil series, we see aerial views of Alberta fields transformed by oil extraction. Vast black reflecting pools fill these compositions, demonstrating that despite the awareness of limited resources, industry seems impervious to the threat of collapse. In the Water series, we see examples of agricultural landscapes rendered unfamiliar through two extremes: intensified irrigation and drought-resistant farming. Brown and ochre veins cut through these compositions, suggesting a microscopic view of biological material, rather than a macroscopic view of reconstituted land.

For Burtynsky, such interventions on the land become a radical form of abstraction. In his Mines series, images of the physical procedure of mining for precious metals in Australia reveal voids left in the landscape, an example of what the artist has described as "a lasting testament to our ambitions". These images effectively trouble our understanding of beauty and horror in relation to consumerism. They show us the lasting impact of progress as an actual scar on the land, yet presented in a visual language that is seductive. Ours is a time wherein experiences of the sublime have been traded for dominion. These works detail, in startling clarity, both the geographic and philosophical contexts for human progress.

Edward Burtynsky (born in 1955 in St. Catharines, Ontario) is one of Canada’s most respected photographers. His work has been included in numerous solo exhibitions, most notably at the New Orleans Museum of Art & Contemporary Art Center (New Orleans), the Corcoran Gallery of Art (Washington, D.C.), and the National Gallery of Canada. His work can be found in the collections of over sixty major museums around the world, including the National Gallery of Canada, the Museum of Modern Art, the Guggenheim Museum in New York, the Reina Sofia Museum in Madrid, and the Los Angeles County Museum of Art in California. Burtynsky has earned numerous accolades for his work, including the TED Prize. He is an Officer of the Order of Canada (2006) and a Governor General’s Award Winner (2016).