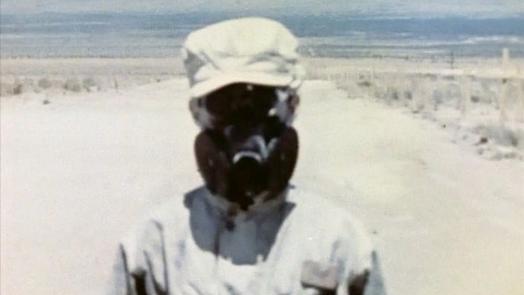 Trinity Site, New Mexico, marks the historically significant testing of the world’s first atomic bomb on July 16, 1945, three weeks prior to the bombing of Hiroshima and Nagasaki, Japan. Under the auspices of the Manhattan Project, the development and use of atomic weapons presented new orders of destructive capability. Today the 8,300 square kilometer range surrounding the original test site is named the White Sands Missile Range (WSMR) and remains active in the steady advancement of increasingly sophisticated military technologies. Two days each year, the WSMR Public Affairs Office hosts an Open House, during which thousands of visitors come to experience the place where the atomic age began.

Since her first visit in 2012, Mary Kavanagh has collected hundreds of interviews on site that reveal a wide range of motivations and interests among those making the journey. Several threads emerge across these interviews—an understanding of the site as sacred; an interest in big science and nuclear technology; anxiety about nuclear war, waste and fallout; and guilt about the use of nuclear weapons on the people of Hiroshima and Nagasaki. In Trinity 3 Kavanagh intersperses these interviews with footage of the missile range as well as archival footage of the bomb test preparations, creating a filmic montage that is in turn jarring, poetic and inscrutable.

Kavanagh is a Professor in the Department of Art, University of Lethbridge. Her research interests include feminist political ecology, technologies of war, and histories of science. For over twenty years, Kavanagh’s artwork has been presented in solo and group exhibitions in Canada and abroad. She is an advisory member of the Atomic Photographers Guild, Montreal, and an Associate Member of the Centre for Documentary Studies, School of Image Arts, Ryerson University, Toronto.

Due to the premature closure of this exhibition during the COVID-19 pandemic, we are pleased to share Trinity3 in its entirety for online viewing, courtesy of the artist.

Trinity3_Kavanagh_2020_5GB from Mary Kavanagh on Vimeo.

A forthcoming catalogue with essays by Peter C. van Wyck and Jayne Wilkinson will be produced in partnership with the Southern Alberta Art Gallery and the Founders’ Gallery at the University of Calgary.

This project is generously supported by KWAG’s Women of Influence for Women’s Art.